Never too old to learn something new!

For several years now I've had my own dotcom, www.sharrysplace.com, and over the years both the look and what I have had on my site have changed several times.  The changes were in part due to what was going on in my own life at the time, and in part to my getting "a wild hair" occasionally to change the looks of my site.  As a result, I recently decided to take classes on how to design a website.  Besides taking classes from an online school, I found a website with loads of great information on html, css, and other pertinent tutorials.  The website, w3schools.com, has a wealth of information and helps me keep up-to-date on the latest standards.

You have to realize that I am not exactly a "spring chicken" having been out of high school for 40+ years.  However, I find that I'm really enjoying learning about how websites are put together.  There are lots of designers and developers out there that are so much more knowledgeable than I will ever be when it comes to designing a website.  They know how to use javascript, jquery, xml, and other "languages" used on the internet.  Knowing I'll never learn as much as they know, what I have learned is so much more than what I knew 10 years ago.

I have to admit to getting somewhat excited each time I learn something new in either html or css.  This results in my playing around with my site to see what I can do with this new knowledge.  It can be frustrating at times trying to figure out why my work won't pass validation, then I feel good when I have that "a-ha" moment after realizing what I did wrong.

After I am finished with my online classes in web designing, I would like to learn more about graphic designs.  At this point in time, I'm not sure if I will take an online class or just surf the web for information.  Either way, I would love to learn more about how to manipulate and create graphics and photos.  Though I use Paint Shop Pro to work with my photos and other graphics, I am interested in learning Adobe Photoshop.

Photography is another subject I'd love to learn more about.  Since receiving my first camera (a Kodak Instamatic X-15)  in 1966, photography has been a hobby I've always loved.  In 1981 my husband bought me a Canon T70 slr camera and several lenses to go with it.  Now I use a Kodak EasyShare Z740 digital camera.  I hope to one day get a more updated digital camera to use, especially when I attend conventions such as ScareFest and Lexington ComicCon.

No matter what your age, you are never to old to pursue knowledge.  If you have a hobby or craft, there is nothing wrong with learning all you can about it.  You may just learn something you didn't know before.  You don't necessarily have to take classes online.  There are lots of tutorials online for practically everything.  You can also contact your local community action center to see if they know of places you can check into for more information.

While I greatly enjoyed this year's ScareFest, it was also learning experience for me.  I realized that the older I get the more I hate driving at night.  As part of the ScareFest experience Kentucky Theater had a midnight showing Saturday night of Evil Dead 2 starring Bruce Campbell, which my son and I went to see.  Since we live about 45 minutes from Lexington, it was about 2:45 a.m. before we got home.  Plus we planned on getting up early Sunday morning to go back to Heritage Hall for the last day of ScareFest.  I guess I'm just too old for those type of hours, which is why I hopefully will be staying in Lexington during next year's convention instead of doing all that driving.

Another lesson I learned is that I need a newer, more up-to-date camera.  As much as I like the one I've got, it kept either "eating" up batteries or would blur my pictures somewhat.  Was I the cause of the blur by not holding the camera steady, you ask?  Maybe, but there were times when I was very steady and it still had a fuzziness about it.  But...since the camera wasn't that expensive, I can't complain as it takes decent pictures around the house.  However, if I want top quality pictures from events such as the ScareFest, I think it behooves me to put up some money periodically to go towards a better camera.

The main lesson I learned from the three days I spent having a blast in Lexington is that I don't envy the tasks that Patti & Chuck Starr, Jeff Waldridge, Jennifer & Lee Kirkland have each year putting such an elaborate event together.  By the time this year's event started, if not before, they had already started thinking about 2013 and what they wanted to do to double the size of it.  Just thinking of all the logistics and hurdles they have to jump over is mind-boggling.  Am not sure how they do it, but whatever their strategy is, it seems to be working because the ScareFest gets better every year.  I'm just glad it's not me putting it together!

So...here's to 2013.  I plan on trying to act on the lessons I've learned between now and next September.  The hotel rooms are already reserved; money needs to be saved to pay for that AND the new camera I hope to have with me next year, and to pray for the great people that do all that hard work trying to put together ScareFest so that the fans like me can have a great time.
Posted by Nanny at 8:59 PM No comments:

A Weekend of Scary Fun 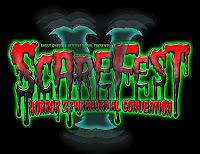 On the weekend of September 28-30, 2012, the Lexington Center was the epicenter of all things scary and paranormal.  People from all over the United States converged on Lexington, Kentucky, to attend the 5th Annual ScareFest, a convention highlighting the world of horror and paranormal movies and television shows.  Not only were you able to interact with the actors of movies and TV, but also with writers, film-makers, authors, directors, and make-up artists.  Approximately 150 vendors were on hand with all types of merchandise for your perusal.  New this year was a horror-themed putt-putt course.  Though the convention was a huge success this year, it was not without some last minute "heartaches" as four celebrities had to cancel.  Kane Hodder, star of four Friday the 13th movies, and Jon Bernthal, star of The Walking Dead, had to cancel due to a scheduling conflict. Malcolm McDowell,  star of A Clockwork Orange, and  Clive Hall, mastermind of Candyman & Hellraiser, had to cancel due to health issues.

The convention also hosted its first ever live rock concert featuring Nick Groff, star of the Travel Channel's popular series Ghost Adventures.  This was Nick's first live concert. Another first for Nick at the ScareFest was the pre-release of his new book, Chasing Spirits:  The Building of the Ghost Adventures Crew.  The official release of the book is October 2, 2012.  If your local bookstore doesn't get it, it should be available online at Amazon and Barnes & Noble.

Some of the other celebrities included were:

On the last day of this year's convention, a Q&A was held with Jeff Waldridge, Event Manager, Patti Starr, owner, Chuck Starr, Executive Producer, Jennifer Kirkland, Administrator/Social Media Director, and Lee Kirkland, Programming Director/Head of Security.  They were very open with what they had planned for the future of the ScareFest.  Besides wanting to increase the floor space of future conventions, they are looking into bringing in more activities the fans can participate in.  Some of the activities they are looking into were mentioned, but I prefer to let them 'spill the beans'.

I asked if any of the former guests had recommended the ScareFest to other celebrities, to which I received a positive answer.  The panel said they have had, upon occasion, celebrities call them wanting to attend.  What was surprising to me was the fact that the Ghost Adventures Crew, consisting of Zac Bagans, Nick Groff, & Aaron Goodwin, like the ScareFest so much it is the only convention they will go to.  Kane Hodder, the only actor to play Jason in the Friday the 13th movies 4 times, has attended the first 4 conventions.  He was suppose to attend this year, but had to bow out due to a scheduling conflict.  Another guest who comes to the ScareFest every year is Chip Coffey.  To come back each year I believe says quite a bit about the quality of the ScareFest.

This was my first year attending all three days. I must say it was an great experience, and am planning on doing it again next year.  I can only imagine all the hassles, headaches, and frustrations the staff and their volunteers go through in order to bring together such a great convention.  It has to be extremely hard work, both physically and mentally, to put forth such a massive undertaking.  I admire their tenacity and willingness in doing it year after year.

BACKGROUND:  Approximately around 2006, Jeff Waldridge approached Patti Starr, president of Ghost Chasers International, Inc., with the idea of having a horror film convention in Lexington.  She liked the idea, and suggested including the paranormal.  Mr. Waldridge, having experience in promoting wrestling, spent the next two years researching how to go about setting up such a convention.  After attending every type of convention ranging from comiccons to lawn & garden, Jeff finally came up with several ideas.  With the help of Chuck Starr, Patti's husband and executive producer of The ScareFest, the first annual Scarefest was "born" in 2008.  That year they had 5,000 visitors.  In 2011 the attendance had grown to 12,000.  I look forward to hearing how many attended this year.

If you like attending conventions such as The ScareFest, I highly recommend you attend this one.  You will not be disappointed.

I am working on updating my site with pictures my son and I took at this year's ScareFest.  As soon as I get them uploaded, I will be posting the link.  If you would like to check out ScareFest's site, you can do so at www.scarefestcon.com.
Posted by Nanny at 9:13 PM No comments: